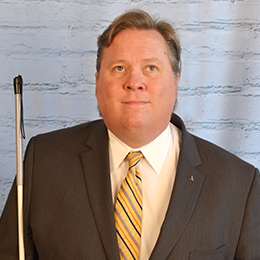 Everette Bacon was born in Huntington Beach, California. At the age of five he was diagnosed with cone-rod dystrophy, a condition which had run in his family on his mother’s side for thirteen generations, causing rapid-onset blindness primarily in female family members. Despite the diagnosis, Everette’s family took the advice of teachers and medical experts, believing (or, more accurately, hoping) that since Everette was male and his vision was not deteriorating rapidly like that of other family members, he was unlikely to go blind. As a result, Everette did not learn Braille or other alternative techniques during his school years. Looking back, Everette says, his mother and other family members wish that they had encouraged him to learn Braille and other blindness skills.

When Everette was around eighteen his entire family moved to Texas. Everette pursued a degree in church music at Dallas Baptist University. He jokes that he was pushed toward music because “you know, blind people sing.” His first job was teaching a seventh grade choir, but he found it not to his liking. Searching for other employment in order to earn money to help his wife through medical school, Everette ultimately accepted a management position with Blockbuster Video in 1997. He was very successful in this position, winning several awards and steady promotions. By 2004, he was managing ten stores in the Houston area.

Everette’s eye condition began to worsen, and instead of giving up, he adapted by using alternative techniques. “I started carrying a cane, mainly for identity, but I was using it when I felt I needed it.” “I was never embarrassed or ashamed about becoming blind, because I grew up around blind people, adapting was something you just became accustomed to doing.”  However, when he asked for reasonable accommodations from his employer, instead of granting these accommodations, Blockbuster terminated his employment despite his outstanding record. The company even went so far as to describe Everette’s conduct as “fraudulent,” implying that he had deceived the company about his capabilities, even though he had previously been praised and awarded for his work.

This experience traumatized Everette and his family. His wife, mother, and other family members sent angry emails to everyone they could; urging readers to avoid shopping at Blockbuster based on discrimination against the blind. One of these emails found its way to Scott LaBarre, the president of the National Federation of the Blind of Colorado and a successful disability rights attorney. Scott took Everette’s case, and ultimately Everette received a settlement from Blockbuster. More importantly, though, he learned about the National Federation of the Blind and the many battles the organization has fought in the effort to advance and protect the civil rights of blind people. “I had heard of the Federation and been told that they were militant,” Everette says, “but my experience taught me the importance of our advocacy.” There are so many reasons to be proud of whom we are as blind people, and the Federation has paved the way for our climb to the top of the mountain of civil rights!

In 2004, Everette and his wife, Dr. Angela Peters, moved to Salt Lake City, Utah. Everette became involved in the Utah affiliate and developed what he describes as life-changing relationships with dedicated Federationists like Nick Schmitroth, Karl Smith, and Deja Powell. These friends helped Everette improve his blindness skills and grow in the movement. Everette was also looking for new employment opportunities in Utah and heard about a job opening as a Blindness Skills Teacher at the Utah Division of Services for the Blind and Visually Impaired. Everette remembers speaking with Ray Martin about the fact that he knew nothing about teaching blind people, Martin told him that being blind was the most important qualification. The agency supported Everette in his pursuit of a master’s degree in rehabilitation. He went from teaching technology to supervising the technology staff, and now serves as the agency’s field services coordinator, overseeing all of the agency’s technology and employment services, supervising a staff of nine.

Everette began advocating for Utah’s blind residents with an effort to encourage a prominent local cinema chain to incorporate audio description technology into its theaters, so that blind people who wanted to experience movies with audio description could do so. An avid movie fan with an extensive collection dating from his Blockbuster days, he believes that audio description can enable blind people to connect more easily with their sighted peers when discussing entertainment. “One of the most valuable lessons I have learned from the NFB is the understanding that blending in to society is an important skill. Being able to relate to our sighted colleagues about movies, television, politics, and sports are excellent paths to opportunities that help change common misconceptions about blindness.”

In 2012, Everette was elected president of the National Federation of the Blind of Utah. He is proud of the affiliate’s successful advocacy for a state “mini-508” law requiring accessibility of new state websites and procurement of accessible electronic and information technology; subject to fines when agencies fail to comply. His advocacy for accessibility made him an outstanding candidate to serve as the Federation’s representative on the Disability Advisory Committee to the Federal Communications Commission (FCC). He was nominated for appointment to this committee by President Riccobono and duly appointed to serve by the FCC in 2015. Everette is chair of the Utah Library Advisory Board. He also sits on the Utah Assistive Technology Council and the Library of Congress’ National Library Service for the Blind’s Audio Equipment Advisory Committee (Western Region). He was unanimously elected to the Board of Directors of the National Federation of the Blind at the organization’s 2015 convention. He and Angela and their two dogs live in Salt Lake City, but Everette still roots for his beloved Dallas Cowboys.