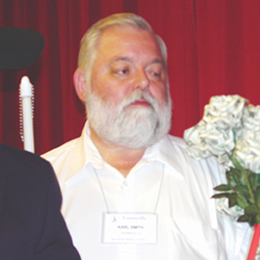 Karl joined the NFB in 1978 and has held a number of leadership positions since including: local chapter president, secretary, and state president from 1981 to 1996. He currently serves as 2nd vice president of the state affiliate and treasurer of the Salt Lake chapter.
Karl is Vice President of the Louisiana Center for the Blind board of directors, a member of Toastmasters and is also active in his church. Other interests include singing, playing the guitar and traveling.
Karl and his wife Sharon have five children including two from Viet Nam and one from Guatemala.